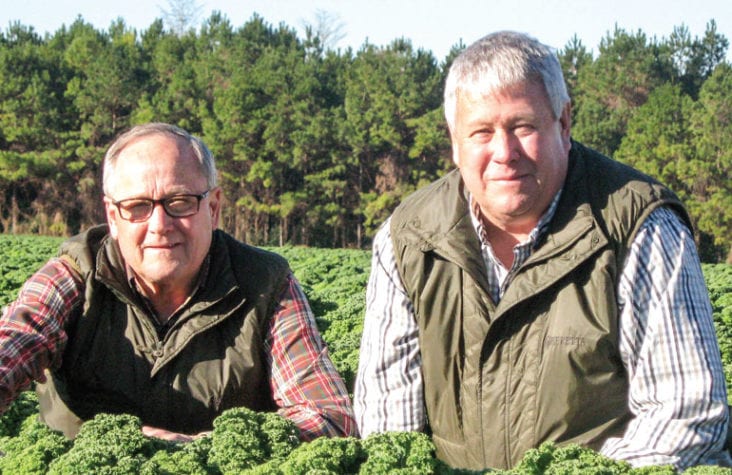 An unmistakable sight of summer is the oval-shaped Athena melon with its yellow-orange flesh and coarse netting skin.

Millions of the melons are successfully grown each year at Spring Hill Produce, a division of Lewis Taylor Farms in Tifton, Georgia, and one of the largest privately owned vegetable and greenhouse operations in the Southeast.

On the farm’s sprawling landscape, 650 acres are dedicated to growing melons.

A successful growing season literally develops from the ground up starting with pulling soil samples twice a week to ensure there are no problems with disease or pests.

“We use both overhead irrigation and drip line irrigation. We put fertilizer in the drip to maintain the crop all through the growing season. The drip is more sustainable in our process of growing cantaloupes,” he said.

Melons are harvested around May 25 or June 1 and the season ends about Aug. 10.

The produce is hand-selected at its peak, then it makes its way to a state-of-the-art cantaloupe facility built in 2007.

“We run them through our packing facility, which has an Olympic-size swimming pool. This eliminates bruising at the first critical control point and provides an immediate first sanitation step as they enter the packing facility,” Brimm said.

The melons wade through oxygenated water, 13,000 gallons per minute, as part of the sanitation process. The produce wash, Ozone, kills listeria, e-coli and salmonella. Computers are also used to consistently monitor water and any potentially harmful agents.

First cantaloupes of the 2015 season coming off the trailer and about to go into the Hydro Cooler.

“It’s hard to get cantaloupe to cool down because of the cavity it has. We have to pull the heat out of the cavity (as opposed to watermelon, which has a hollow cavity),” Brimm said.

The Hydro Cooler allows Spring Hill Produce to ship cantaloupes within the first hour of harvest.

“When most people ship them, they’re just not cold enough,” Brimm said.

According to George E. Boyhan, W. Terry Kelley and Darbie M. Granberry in their University of Georgia Extension essay, “Cantaloupe and Special Melons:” “Under most circumstances, cantaloupe cannot be properly cooled by merely placing palletized shipping containers in a room cooler with circulating fans only. Cantaloupe boxes cannot be cooled by placing them directly on a refrigerated truck. Optimum storage requirements for cantaloupe are 36 degrees Fahrenheit to 41 degrees Fahrenheit and 95 percent relative humidity.”

Just as important, the Hydro Cooler exponentially increases shelf life, about 15 days, for retailers and consumers due to the critical rapid break in heat curve.

The cantaloupes are then precision sized and expertly graded. Spring Hill’s packing and cooling operations can accommodate fresh produce needs – from the largest supermarket chains to the independent specialty markets. Each season, this single location ships millions of melons all over the Eastern and Central United States. Many seasons see perfect receiving records.

“We just really find that our customers want our cantaloupe because we’re able to distribute them quickly and properly,” Brimm said.

More than knowing they’re sending a product that will last longer, Spring Hill Produce’s chief concern is offering a quality product that retailers and consumers are confident about buying.

“After the listeria outbreak in Colorado, we felt the need to do something to minimize our loss of market, and we wanted to build confidence back among consumers. My partner, Ed Walker, and I helped to start the Eastern Cantaloupe Growers Association (ECGA),” Brimm said.

The listeria outbreak in 2011 was one of the deadliest outbreaks of food poisoning since 1924. The outbreak killed 33 people and sickened hundreds.

The Eastern Cantaloupe Food Safety Program was established by eastern United States cantaloupe producers, packers, shippers, etc., in Georgia, Indiana and North Carolina to identify ways in which they could work cooperatively to enhance consumer and retail confidence in the eastern cantaloupe market and supply chain.

“We went to Washington, D.C., to write an ECGA Global Food Safety Initiative (GFSI) audit plan with eight riders. It was a tremendous benefit to us as growers and also (to) retailers and consumers,” Brimm said.

Members of the ECGA are required to maintain strict adherence to specific food safety protocols, metrics and practices. Membership in ECGA is open to any grower of Eastern cantaloupe varieties who is committed to Commodity-Specific Food Safety Guidelines for the ECGA high standard of food safety metrics in their operations.

ECGA members are required to obtain passing or acceptable third-party certification from any GFSI-benchmarked audit standard for the field/ranch, harvest crew and packing operation; undergo at least one unannounced audit during the production season; and maintain the Commodity-Specific Food Safety Guidelines for the ECGA.

Growers who meet and follow membership requirements are allowed to affix an “ECGA-Certified” label to their product and are listed in a database of approved providers that is available to retailers.

“We’re trying to get more growers into it,” Brimm said.

Spring Hill continues to conform to the GFSI as well as the “over and above” requirements of the ECGA.

Measures such as pulling water samples for the GFSI audit and the use of an Ozone product in the field to kill any bacteria are just some of the additional food safety steps Spring Hill Produce takes.

“But it’s a big part of what we do. We just feel like it’s our responsibility for us to do the right thing,” he said.