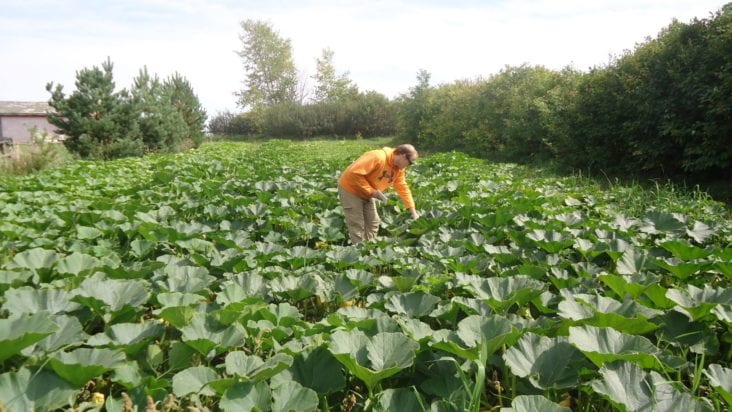 Growing robust squash not only provides a bountiful harvest but helps grow a large enough canopy to overshadow pesky weeds.

Jonathan Schultheis, a North Carolina State University Extension specialist, indicated that weed plants such as pigweed, lambsquarter, cocklebur and ragweed can invade squash plants if these weeds’ growth is too great.

Schultheis suggested growers can invest in herbicides and help control these weeds, especially in the fall; however, he warned growers to be careful when applying herbicides so as to avoid injury to the plant.

A better way to control weeds in squash is to establish a healthy, vibrant plant stand so squash plants aren’t competing with weed growth, according to Peter Dittmar, an assistant professor of horticultural sciences at the University of Florida, and William Stall, an Extension weed specialist also at the University of Florida. To establish this healthy plant, they recommended following good production practices such as applying enough nutrients through fertilization, choosing the best varieties, using irrigation for water needs, plant on well-drained soils, and get a good plant stand to keep weeds from growing too rapidly.

Field preparation helps, too. Dittmar and Stall pointed out that growers can keep down weeds by plowing in early season, as well as disking, cultivating, mowing and even hoeing, if necessary, during the growing season. They warned about cultivating too deeply, which can disturb root growth of the squash plant and possibly injure the roots. Additionally, cultivating too deeply can bring weed seeds to the surface, causing more control problems.

Herbicides help control weeds before planting squash, yet cultivating too deeply can move herbicide-treated soil to areas where squash plants aren’t planted or can put too much herbicide-treated soil in one location. When applying, Dittmar and Stall advised to apply herbicides at the recommended rate based on the chemical label. They also recommended to growers that they calibrate their sprayer properly for the right pressure and use of the appropriate, most effective nozzles. Timely applications are important, too, being careful not to overapply or underapply. Growers should be aware to use herbicides that are labeled in their state and seek assistance of an Extension agent or specialist if they need help with calibration.

They also recommended the use of a weed deterrent such as polyethylene mulch to keep weeds from growing excessively. However, Dittmar and Stall pointed out that mulch will not stop nutsedge weed growth.

The 2015 Southeastern U.S. Vegetable Crop Handbook offers good recommendations for weed and grass control on squash. Please check with the handbook or with your local Extension agent for recommended rates.

For suppression or control of most annual grasses and broadleaf weeds at preplant and preemergence, the handbook suggests using metam sodium, which has a trade name of Vapam. However, a full rate is recommended for nutsedge control. For killing all grass foliage on contact, the handbook points to paraquat, known by its trade names as Firestorm, Parazone and Gramoxone. A stale bed application is recommended.

For most broadleaf weeds that are less than 4 inches tall or for rosettes less than 3 inches in diameter, the handbook suggests using carfentrazone-ethyl, known by the trade name Aim. This does not control grasses.

For growers who want to control annual and perennial grass and broadleaf weeds, the handbook suggested glyphosate, known by several trade names. A stale bed application is recommended.

For control of annual grasses and small-seeded broadleaf weeds, the handbook indicates the use of bensulide, known by the trade name Prefar. With bare ground and plasticulture, use ethalfluralin, known under the trade name Curbit.

Growers who want to control just larger annual grasses and broadleaf weeds, they can apply ethalfluralin plus clomazone, known by the trade name of Strategy.

To suppress annual grasses and broadleaf weeds, the handbook suggests clomazone, known by the trade name of Command. This is not as effective on pigweed and morning glory.

With yellow and purple nutsedge and broadleaf weed control, the handbook indicates the use of halosulfuron-methyl, known by the trade names Sandea and Profine.

Now with most broadleaf weeds less than 4 inches tall or rosettes less than 3 inches in diameter, the handbook again suggests carfentrazone-ethyl, known as Aim.

Growers can use glyphosate, known under several trade names, for most emerged weeds.

For yellow and purple nutsedge and broadleaf weeds, the handbook recognizes halosulfuron-methyl, known by the trade names of Sandea and Profine.

For just annual and perennial grasses, the handbook indicates to use clethodim, known by the trade names Arrow, Clethodin, Intensity and Select. Growers also can use sethoxydim, known as Poast.