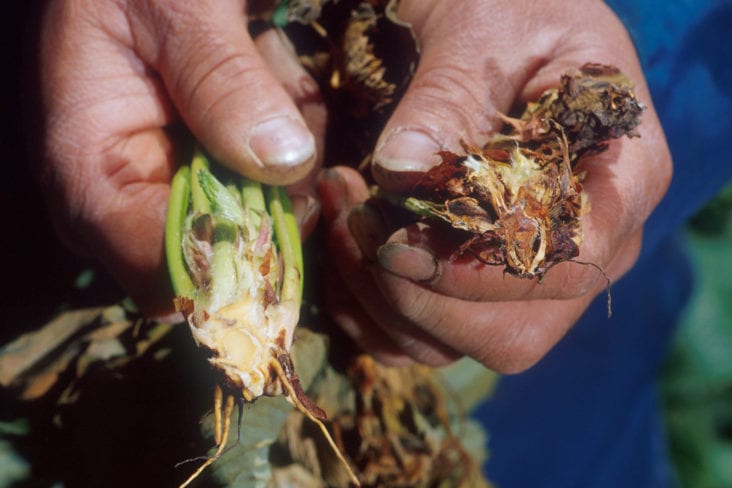 Despite the name Verticillium wilt tomato, the first symptoms of this pest on a tomato are the characteristic V-shaped lesions on the lower leaflets or leaves. Also, the yellowing in a fan-shaped pattern occurs down from the leaf margins. As these symptoms progress further, the leaf veins turn brown, while brown necrotic spots appear on the leaves, which may be confused with some other diseases like early blight.

Diurnal wilting and recovery normally starts at fruit set. At first, the infected plants show mild wilt during the warmest part of the day while recovering during the night. These infected leaves tend to wilt, after which they die and drop off. The symptoms progress all the way up the stem, with plants becoming stunted. Only the upper leaves remain green. Fruits of the affected plants are small with yellow shoulders. They tend to be sunburned due to the loss of the canopy.

This is a cool weather disease, occurring in South Florida during the winter months while the daytime temperatures are between 68°F and 75°F. It primarily occurs in neutral to alkaline soils, and is the biggest problem in Homestead areas, as well as other lower East Coast production areas. Other parts of Florida rarely have problems with it.

The infection takes place when Verticilliurn albo-atrum penetrates the hairs of the root. The fungus then invades the xylem and interferes with the usual upward movement of water and nutrients in the plant. In addition, it produces a toxin which contributes to the leave wilting and spotting.

The wide host range allows the fungus to survive in soils for long periods of time. It is able to attack and multiply in many different common weeds. Moreover, it produces small black resting bodies called microsclerotia, which allow it to survive between the seasons.

This pathogen thrives most in wet soils, and tomatoes and potatoes have to experience at least a full day of saturated soil before the infection occurs.

What is important in the control of this tomato disease are cultural methods. Rotations of four to five years between susceptible crops, good drainage, and proper soil moisture management are key when aiding in control. Soil fumigation is also recommended on high-value crops that are grown on plastic, as it provides control.

The best and the most feasible control, as well as the most economic one is the use of Verticillium-tolerant tomato cultivars. Most of the commercial hybrids contain Verticillium resistance, while there are various available cultivars with varying maturities and superior horticultural qualities.