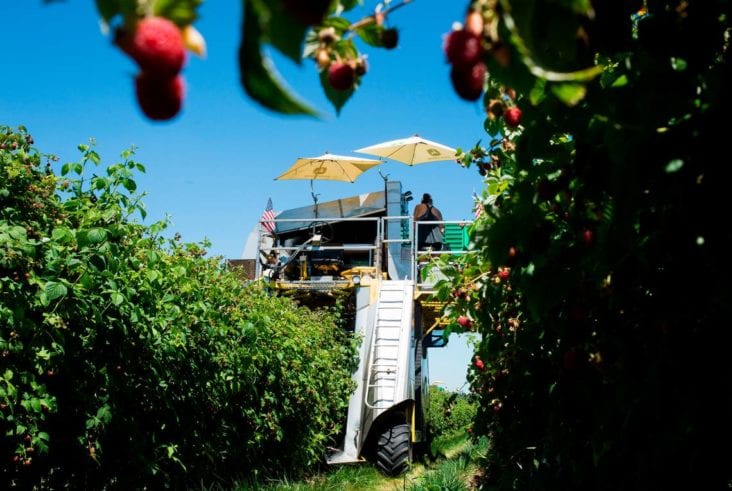 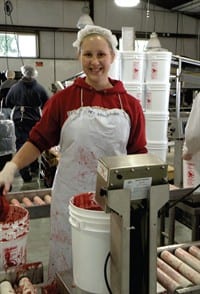 According to the Washington Red Raspberry Commission, Whatcom County raspberry farmers set a record harvest of 66.3 million pounds of raspberries in 2011, a 22 percent increase over 2010. The previous record was 61.2 million pounds in 2000.

Several factors contributed to the record 2011 harvest. New raspberry varieties were introduced, the number of raspberry farmers increased, and so did the number of acres devoted to raspberries. The cold spring provided the benefit of few pests. Rainstorms during early harvest added water and weight to raspberries ready to be picked, diluting sugars, so they were processed as juice. However, near-perfect weather extended the latter harvest and produced higher-grade raspberries.

Frank and Marilyn De Vries own and operate their family farm, Berry Acres Ag, LLC, not far from the little Dutch village of Lynden. The farm’s 280 acres of raspberries are dedicated to frozen raspberry production. During 2011, processing levels reached 12,000 to 13,000 pounds of raspberries per hour.

When Frank graduated with an agricultural degree in 1981, he leased the original 45-acre vegetable farm where he had worked from the age of 12 through high school and summers during college. Today, there are 280 acres spread among eight locations.

Each family member plays a part in the farm’s success. Frank oversees the farm operation, and Marilyn, his wife, runs the office. She keeps track of fruit tonnage and paychecks. Their four adult children – Melinda, Emily, Daniel and Ryan – continue to help with the harvest. Melinda works at the quality analysis laboratory and drives harvesters; Emily drives harvesters and schedules crews; Daniel runs the on-site, 4,000-square-foot wet pack processing plant; and Ryan runs field crews and works as a slabber. Slabber duties include repairing trucks, tractors and harvesters; spraying the fields; and maintaining drip irrigation along with the Flow-Guard filtration system.

“Agriculture is a good way of growing up,” Frank said. “Kids need to learn the work ethic and responsibility. Today’s culture of instant gratification does little to prepare kids for the real world.”

Frank and Marilyn are partners in a 5,000- square-foot, individually quick frozen (IQF) operation that employs 25. IQF raspberries are individually frozen in a quick-freeze tunnel at temperatures between minus 30 and minus 35 degrees Fahrenheit. Quick freezing seals in juices and maintains the original shape of each berry. Offered in three grades, raspberries are packed and sealed in 20-pound boxes and marketed under the Active Berry Packers brand.

On-site farm operations include a 4,000-square-foot wet packing facility and cold storage. Straight-pack red raspberries are whole and unsweetened, frozen in their own juices and packed in 28-pound pails and 400-pound drums. In addition, a sieved-and-seedless process produces raspberry puree, the size of the sieve determining puree fineness and amount of seed removal. The puree is packed in 28-pound pails. Straight-pack and pureed raspberries are marketed under the Whatcom Fruit name.

Committed to community and kids, Frank and Marilyn hire high school and college students during the harvest that runs from the first of July to August 10.

They start at minimum wage and can earn up to $12 an hour according to job responsibility and tenure. They learn that farming is not for sissies. Cell phones are allowed only during lunchtime, when the kids arrive from different fields to a central gathering place at the farm. 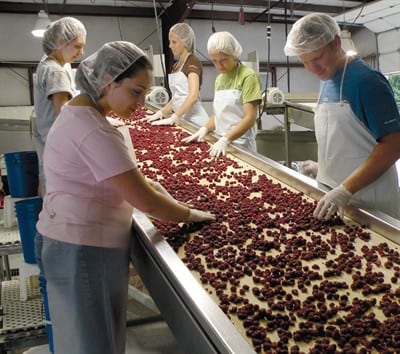 Frank begins new kids with the simpler tasks, advancing them according to their comfort level. Work includes transfer of packed raspberries to cold storage and handpicking undesirable raspberries in the field before mechanical harvest. Frank requires kids to rotate fields to make new friends, especially from competing schools.

Kids earn Berry Acres T-shirts in their first year and jackets their second year. Frank awards black fleece jackets to those who have worked above and beyond.

Berry Acres sells frozen raspberries to 30 to 35 wholesale/retail customers in Japan, Europe and the U.S., including nationally recognized grocery chain stores. Corporations use raspberries in ice cream, chipotle sauces, jams and jellies. Frank had just returned from an American Frozen Food Institute conference that covered the national and international gamut of the frozen food industry.

“Face-to-face communication gives a comfort factor,” Frank said. “I find out how customers are faring with the product and how it relates to the global economy. China and Korea’s middle classes offer sales opportunities. I work on my relationships, building trust. We are competing counter-seasonally with Chile, which sells raspberries to Korea, China, Europe and the U.S.”

“Customers have a whole set of procedures, and you need to get their approval,” Marilyn said. “They tour our facilities and check our standards.”

Besides FDA and Washington State Department of Agriculture approval, Whatcom Fruit is American Institute of Baking (AIB) certified and kosher-approved.

The Boston Rabbinical Council sends rabbis to Berry Acres to ensure kosher standards. Kosher certification translates into a larger market for jams and jellies. Standards include inspection of ingredients and of manufacturing equipment used in the production process and the cleansing procedures of machinery parts.

To ensure raspberry quality, Berry Acres operates a quality analysis laboratory, where raspberry samples are pulled off the processing line every 15 minutes to test for yeast, mold, Brix (the measure of natural sugar content) and harmless extraneous material (HEM). HEM includes small leaf parts that may have been missed during the raspberry harvest.

“Making money is the biggest challenge,” Frank said. “In comparison, growing raspberries is relatively easier when you clean the ground that prevents weeds and diseases. I may rotate corn or potatoes for a year or two to break the raspberry cycle if production goes down. It’s not an exact science but a gut feeling.” 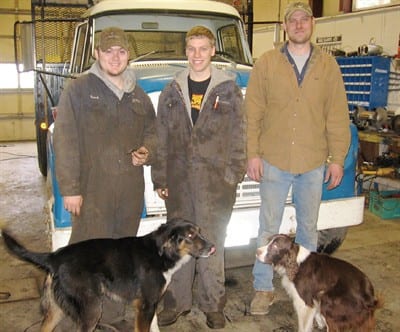 However, the spotted winged drosophila emerged a couple of years ago. This pest appeared in Pacific Northwest orchards along the Highway 5 corridor.

“The drosophila deposits its eggs inside hanging soft fruit, and the breeding cycle is every 10 to 14 days,” Frank said. “They die when the temperature is over 85 to 90 degrees Fahrenheit, but raspberries do not fare well in this heat either. We monitor the fields for drosophila, and if need be we use malathion; that is fairly effective.”

Washington State University and the Northwest Washington Research and Extension Center are working closely with fruit farmers to prevent drosophila infestation. Progress is being made on how to best monitor and measure drosophila presence and impact. The next steps will include how best to fight back should an infestation occur. The research can potentially help save Washington’s $120 million berry industry and the jobs the industry creates.

Berry Acres operates 15 raspberry harvesters, including a Korvan Model 9000. Oxbo International Corp. manufactures this harvester that features a curved belt delivery system for minimal raspberry drops. Its knife-edge cleaning system gently and effectively blows debris out of the machine. Expanded stainless steel sides and polycarbonate catchers are gentle on plants but still capture the raspberries. The vertical shake system is adjusted as the season progresses, because raspberries ripen from the outside to the inside of bushes.

“This country’s agriculture would be lost without their work ethic,” Frank said. “I really appreciate their hard work.”

The author is a freelancer contributor based in Poulsbo, Wash.