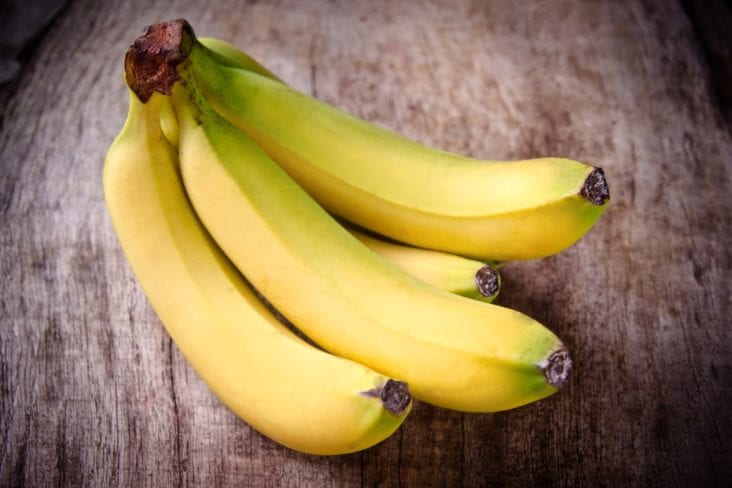 Using the Viente Cohol variety, which originated in the Philippines, he is able to plant an 18-inch banana plant after the last freeze of spring, and it flowers and produces mature fruit before the first freeze of winter. 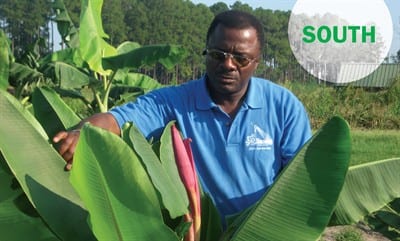 Ag economist Esendugue Greg Fonsah of the UGA inspects an African Red ornamental banana plant-a classic example of an ornamental that can grow successfully in the Southeast. Research on cold-hardy banana plants is defining new potential markets for the region.
PHOTOS COURTESY OF ESENDUGUE GREG FONSAH UNLESS OTHERWISE NOTED.

“It has something to offer from a genetic standpoint that’s not widely distributed,” says Wallace, a classically trained professor of organic chemistry at Armstrong Atlantic State University in Savannah, Ga., where he has conducted banana research since 2002. “The Viente Cohol has a lot of potential because of its cycle time.”

With the plant’s produce cycle proven, Wallace is now working to find ways to make the Viente Cohol more cold-hardy and broaden what is already considered a potential new market for locally grown banana trees and fruit.

“I think there will come a time when there’s a limited commercial potential for this,” says Wallace. “Whether or not [Viente Cohol] is the ultimate answer is still out there. Initially, the goal was to see if we could find a banana with cold tolerance that would produce quickly. That’s how Viente Cohol was identified.” 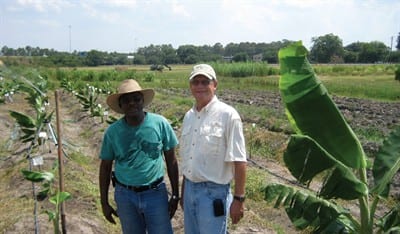 Greg Fonsah and entomologist Will Hudson, both of the UGA, work at the university’s banana farm in Tifton, Ga., where research for the Viente Cohol and other banana cultivars is getting lots of interest from area growers.

Wallace’s love of the banana in all of its glory – ornamental and edible – has been cultivated for many years.

“Bananas have always had a special place in my heart because they are so beautiful. Along the way I discovered there was a lot of unexplored research, and the university allowed me to work on that.”

He started out as a backyard breeder, with about 100 banana and citrus plants at home. At the university, where Wallace uses bananas as a teaching tool, he has grown several hundred banana plants during the course of his research.

“This is a beautiful example of organic chemistry and plant biotechnology working together,” Wallace says.

The Viente Cohol’s unique characteristics emerged in 2005 after Wallace studied more than 50 cultivars in search of an edible banana outside of a tropical environment. He kept modestly sized plants in a protected environment over the winter and then transplanted them in mid-April after the danger of spring frost had passed. Plants as small as 18 inches tall reliably produced mature fruit by mid-October, with an average bunch weight of about 17 pounds and about 160 fingers per bunch.

The Viente Cohol fruit is about 4 inches long and 1 inch in diameter and is smaller than the Cavendish variety most commonly seen year-round in grocery stores. Those who’ve tasted the banana say it has hints of citrus. 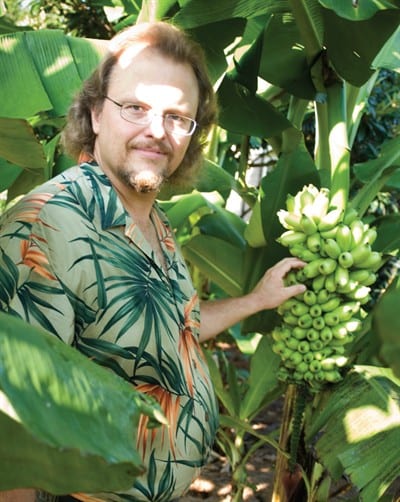 “This could be a specialty crop, creating jobs, saving fuel and keeping specialties local,” he says. “There are so many exciting things to consider.”

While interest is growing in the Viente Cohol as it is now, Wallace is developing new hybrids with distantly related but compatible bananas to find even better candidates that would expand the geographic area for banana production in the U.S. and worldwide.

Esendugue Greg Fonsah spends a good bit of time convincing southeastern farmers to be patient. News reports – in publications and on television – about the Viente Cohol’s potential in Zone 8 have generated lots of interest in a new locally grown crop.

“Growers know about this product, and they are very excited to start,” says Fonsah, an ag economist with the University of Georgia’s College of Agricultural and Environmental Sciences and head of the UGA’s banana project. 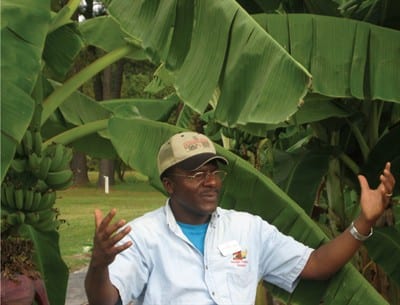 Growers in Georgia and throughout the Southeast have the opportunity to plan ahead for banana crops, including the short-cycle Viente Cohol, which can flower and produce fruit between spring and winter freezes if cultivated properly. Greg Fonsah of the UGA speaks to a group of growers about the potential.

However, he points out that there are a few hurdles relating to logistics and research that need to be cleared before farmers dive in. For example, Viente Cohol seeds and plants are not yet widely available for purchase. Even if they were, there is critical research required to meet EPA regulations for chemical use with banana crops in the U.S.

Fonsah’s banana team, which includes a pathologist, an entomologist, and agricultural and bio-engineers, writes feverishly for grants to fund ongoing research that identifies solutions for potential threats from disease and pests. The group’s research has already verified viable threats, such as root rot.

“Once we get one grant we’ll be able to expedite this; right now money is hard to come by,” says Fonsah. “Otherwise, [Viente Cohol] is ready to go.”

The research network recently expanded to include scientists at Auburn University in Alabama and Florida A&M University, where Fonsah helped to set up growing facilities.

Fonsah’s life has centered around bananas since 1988. He has worked with Del Monte Fresh Produce, Lapanday Food Co. in the Philippines and Aloha Farms, Inc. in Hawaii, where he initiated their banana export market to Japan, Dubai and Hong Kong. He also served as a banana and marketing consultant in many countries. Fonsah is widely published on the subject of bananas. He published a book, “Economics of Banana Production and Marketing in the Tropics: A Case Study of Cameroon,” in 1995 and has contributed to other books and published scientific and academic articles almost four dozen times.

Economically speaking, Fonsah easily frames the banana market as a whole: about 99 percent of the $1.5 billion banana market in the U.S. is imported, with only 2,000 acres grown in Hawaii and Florida. Americans consume a third of the world’s production, averaging 33 pounds per person each year.

As a niche market, which is what the Viente Cohol would be, Fonsah says bananas will be a powerful investment and a lucrative business. The plants multiply, creating seeds and plants that can be replanted and sold. In addition to producing fruit, the flowers and leaves are also profitable crops.

In addition to the research on the Viente Cohol, the UGA’s banana project has identified two other cultivars that may have better potential for bunch sizes. The group is also focused on the potential for cold-hardy banana plants in the landscaping and ornamental industries, and as an alternative energy source.

“This will boost the economy,” says Fonsah, who adds that as growers need seed, plants, fertilizer, and chemicals, “this will create employment too.”

Imported: According to the United Fresh Produce Association, the bananas available in the U.S. year-round are primarily imported from Columbia, Costa Rica, Ecuador, Guatemala and Honduras.

Prices up: Banana prices are up in 2011 because of limited supplies after storms and floods destroyed crops in major Latin American growing regions. Supplies reached normal amounts over the summer and were expected to remain in line with demand through the end of the year barring any additional weather problems.

Concern: The Cavendish banana, the variety found in grocery stores every day, is being threatened by a strain of fungal wilt in Asia and Australia. Industry players are concerned about its potential spread to Latin America.

Whether growers are interested in the Viente Cohol plant for personal, landscaping or commercial uses, they all share one challenge: they need something to grow.

“The bottleneck right now is plant availability,” says Gerard Krewer, a blueberry farmer and consultant who was a fruit specialist at the University of Georgia for 28 years. He worked with Wallace on Viente Cohol research extensively. “Until we get some plants available, there’s not much that can be done.”

Many tropical plant nurseries are relying on tissue cultures to provide plants to buyers, and they are not becoming widely available quickly enough.

Don and Katie Chafin, owners of Katie’s Going Bananas farm in Homestead, Fla., say they receive steady interest in Viente Cohol plants from individuals who want them for landscaping and other ventures. Going Bananas is a banana plant nursery and mail order company with between 80 or 90 cultivars at any given time. This is where Wallace encountered his first Viente Cohol.

“The lab has had a problem with tissue culturing the plant,” says Don. “In general, all of our field-grown Viente Cohol bananas are doing fine. We’re just not able to grow sufficient quantities fast enough to meet the demand. We have many customers who have been waiting some time to get a chance to grow these. At the present time, our projection is in the spring of 2012, depending on winter conditions in Florida and the tissue cultures now being developed.”

“We are planning on having it for sale to growers in the spring in small numbers and build from there,” says Ty Strode of Agri-Starts.

For growers with smaller operations or pick-your-own businesses, the Viente could work nicely as a dancing chicken.

“As I see it, and I’m a farmer, I could use it as a loss leader, as a way to entice people in,” says Krewer. “For example, if you are selling pumpkins in the fall, you might offer the bananas and banana ice cream. That would be a big hit. This is a possibility for South Georgia and coastal South Carolina.”

In this model, Krewer suggests that the bananas might be sold for $1 a pound, compared to the 59 cents that the Cavendish averages.

Growers considering commercial-scale production need to have a greenhouse for Viente Cohol until a more cold-hardy version is available. Krewer says Viente Cohol responds to lots of fertilizer and irrigation.

The plants a grower puts out should be at least 18 inches tall, and will produce between 15 and 20 pounds. Be prepared – when this fruit ripens it happens all at once.

“My impression is if you put them out and don’t take care of them, you won’t get anything,” he says. “It’s not a cheap crop.”