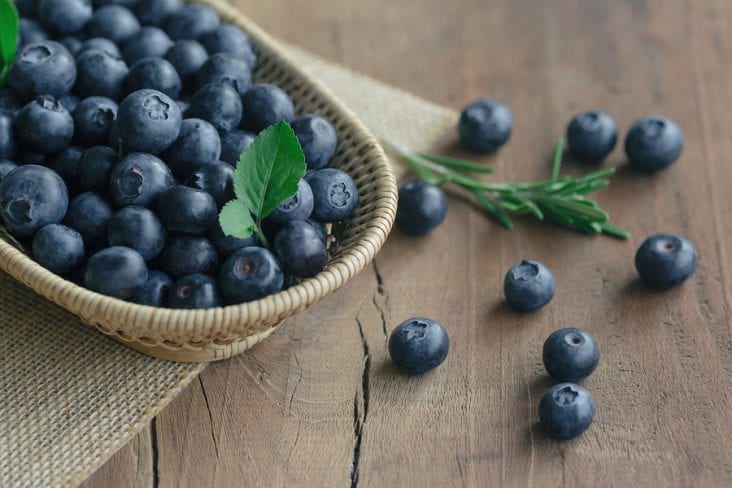 Like most anywhere in the USA, fruits, and vegetables are grown in the Danville, Virginia, area, and occasionally, growers will inquire about growth problems to local Extension agent Stuart Sutphin. However, when it comes to blueberries, the silence is deafening.

“I know people around here raise blueberries,” he said, “but apparently they don’t have too many problems with them because I hardly ever hear from anybody about blueberry problems. Usually, people are always calling me about insect and disease problems.”

The lack of communication from growers might be because of the region’s land. “We have really good soil for growing blueberries,” Sutphin said. “Blueberries need a well-drained, very acid soil, and our native soils generally fit that description—real sandy clay. The pH generally runs around 5.0 to 5.5. That’s good for blueberries.

“The one thing about blueberries that makes them so well adapted to this area is that they’re native to this part of Virginia,” Sutphin said. “I don’t grow blueberries because the woods around my house are full of them.”

He said fewer pests are around because they don’t seem to attack the native plants as much as ones from other parts of the world.

Naturally, pests can’t distinguish between good soils and proper pH levels; however, they can spot an unhealthy plant, one with a low or too high pH. He said if the soil pH is not right, then the plant’s nutrients are lacking. “The soil pH affects the chemical structure in the soil,” he said. “You can have all the nutrients there, but if the pH isn’t right for that plant those nutrients are not in a form available to the plant. And that puts the plant under stress. Plants are like people. When they’re under stress, they’re more likely to get sick, and also plants will attract more diseases and insects when they’re under stress. The insects want the weak ones.

“The same thing [is true] with plants. Plants have a natural defense system like humans,” he said. “Plants have a similar system to help them repel attacks from insects and diseases. The stronger they are, the better their natural defenses can repel problems. But the unhealthy plant’s immune system is not as strong. It’s Darwin’s theory of natural selection I guess where the weaker are eliminated by nature. The strongest survive.”

He said the spotted wing drosophila started showing up in Virginia during 2011, but Extension personnel is still learning about them. “We’re still on the steep part of the learning curve on this one,” he said. Luckily, Southside Virginia has not seen any infestations.

Sutphin said most of the chemical controls used on insects are preventive to keep problems from occurring. However, a healthy plant can help keep those pests away. “Good cultural management generally results in healthier plants and then fewer pest problems,” he said.

Those good cultural practices start with enough fertilization, proper irrigation source in the first stages of fruit development, the right nutrients applied to the soil if they aren’t there already, and efficient pollination from bees. All of this helps keep plants healthy and pests away.

A healthy plant attracts wildlife such as birds and deer. It seems that most any type of birds like the berries, he said, and deer, which are vegetation-eating animals, particularly like the green leaves and small twigs of healthy plants, as well as the fruit.

Sutphin said wildlife may be keeping more growers from raising blueberries. “Blueberries are one of those things that I think we will start to see more of out here once people figure out how to protect them from wildlife,” he said.

To protect blueberries from wildlife, Sutphin said growers can turn to net stretched over the bushes. This especially helps against birds and offers some protection from deer. They also can use repellents said. But he said they will need to keep applying repellents every two to three weeks for them to be effective. In addition, he can put up fencing, mainly to keep out the deer.

“The most effective fence is one that’s about five feet tall,” Sutphin said, “but it’s built at a 45-degree angle to the ground so it leans away from the field that it’s protecting. Deer do not have depth perception. They can’t tell how far across they would have to jump so they don’t try.”

Sutphin has even heard of some growers using woven wire fence about 10-feet tall to keep deer out. Others use electric fencing.

Keeping pests away from blueberries, whether insects or wildlife, requires good management practices, know-how, and some logic. If growers combine all those, Sutphin will likely still hear just silence, though they will be raising more blueberries.