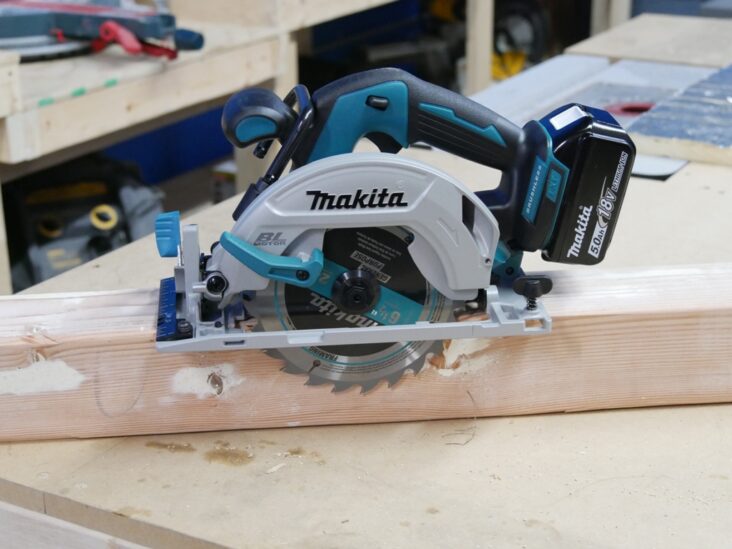 Makita is a longstanding Japanese tool manufacturer that introduced the world to the first rechargeable power tool. Since the 1978 debut of their nickel-cadmium battery-operated drill, the company has gone on to create some of the most revered cordless circular saws on the market.

In fact, by 1989, the company had already sent their Giorgetto Giugiaro-designed circular saw to the World Design Exposition. As of today, they continue to push out a steady stream of innovative products.

Makita began 100 years ago, making its start as a motor sales and repair company. In 1958, the company released its first-ever electric circular saw. A few decades later, they released a modest 7.2-volt cordless tool line that shared the same battery and charger. Not long after, they raised the bar to 9.6 volts.

Then, in 2015, they broke the glass ceiling by releasing a hundredth addition to their slide-style 18-volt lithium-ion battery line.

The Makita cordless circular saw comes in the company’s signature teal and black color scheme. Dig below the surface of this attractive tool, and you’ll discover a powerful motor, long-lasting battery, and all-around ergonomic design.

In fact, the Makita battery-powered circular saw is a favorite amongst contractors who are striving optimize workflow at their job site. 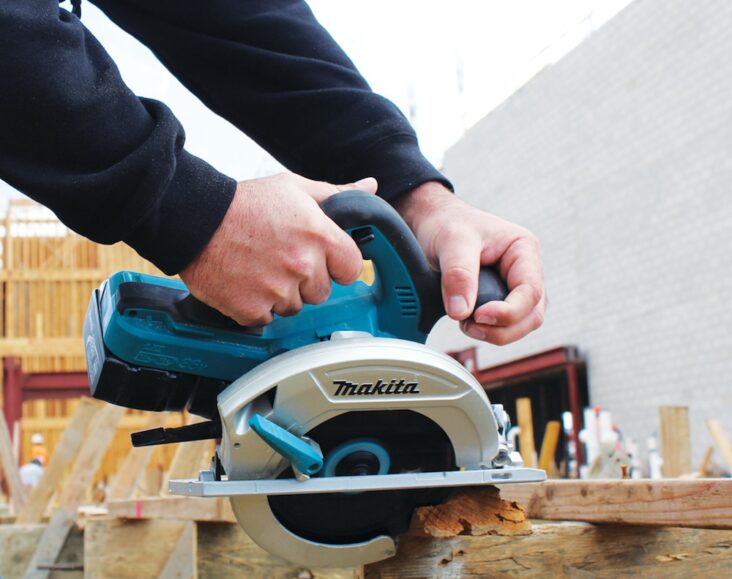 There’s little doubt that Makita can churn out a quality cordless circular saw, but you’re probably wondering what makes it worth your hard-earned dough.

For starters, the company has developed some of the longest-lasting lithium-ion batteries on the market. Their LXT® batteries pair excellently with Makita’s Rapid Optimum Charger, enabling hundreds of cuts per charge. On top of that, the company utilizes industry-leading brushless motors. Not to mention, all Makita products are backed by their proprietary STAR Protection Computer Controls.

Makita’s LXT® batteries are capable of delivering extreme power under even more extreme conditions. According to the company, they work great in temperatures as low as -4 degrees Fahrenheit. Meanwhile, the Makita Rapid Optimum Charger utilizes a built-in computer chip to control the current, voltage, and temperature Makita batteries as they charge.

On top of that, the chargers feature built-in fans that help circulate air and keep temperatures down for faster, more sustained power. What’s more, the batteries and tools exchange digital temperature and voltage readings in real-time. As if that’s not enough, the saws utilize Bluetooth to increase their cutting productivity and reduce noise.

Some Makita cordless circular saws boast X2 LXT® technology, meaning they run off two 18-volt LXT® batteries. Further increasing their versatility, these Still, if you invest in the former, then you have the potential to produce 2 1/2 times more cuts than the traditional 18-volt system.tools are still compatible with Makita’s traditional 18-volt batteries.

Makita’s onboard Allen wrench (for blade changes) also outdoes the competition. In fact, it’s well-placed and super secure. On top of that, the Makita cordless circular saws have an easy-to-adjust raised black and white bevel guides that makes on-the-spot adjustments fast and accurate.

Makita seems to always be looking for ways to expand their cordless tool lines and one-up the competition. If you’re someone who’s always eager to add to your cordless collection, you can definitely count on Makita to release something fresh in the near future.

On top of that, Makita’s battery is arguably the most powerful compact tool power source on the market. Not to mention, their cordless circular saw is incredibly ergonomic and easy to maneuver.

Makita doesn’t get much wrong. If we had to choose a downfall to their circular saw, it would its price. The saw is priced high compared to the competition, but the bonus safety features are all the convincing we need to turn out our pockets.

Makita power tools are available from a wide range of online and brick-and-mortar retail stores. As such, their prices vary ever so slightly. Still, the average price for their 7 1/4-inch Circular Saw Kit with two 18-volt LXT batteries, is around $350. That same tool sells for a tad over $150 without the batteries. Then again, the sub-compact (6 1/2-inch) version (with battery) sells for roughly $250. 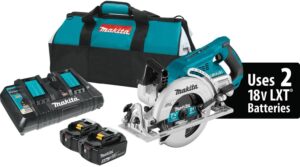 With dozens of amazing battery-powered tools under their belt, Makita’s best-selling cordless circular saw has to be the XSR01Z LXT Lithium-Ion 18-volt brushless circular saw. While it may be a mouthful, this rear-handled 7 1/4-inch saw is a phenomenal buy. It delivers 5,100 RPM and offers 2 1/2 times the number of cuts as a traditional 18-volt saw. Not to mention, its brushless motor gives it an unbeatable life span.

The XSR01Z’s ergonomic design makes it a favorite amongst professional contractors. In fact, the combination of the rubber-lined rear handle and front side grip give it one of the smoothest cuts we’ve ever had the pleasure of completing. Not to mention, its X2 LXT technology delivers nearly 600 two-by-four crosscuts per charge.

Now that you’ve learned a bit about the Makita brand, be sure to head on over to our battery-powered circular saw Best Battery Powered Circular Saw to see how they fared against the competition.