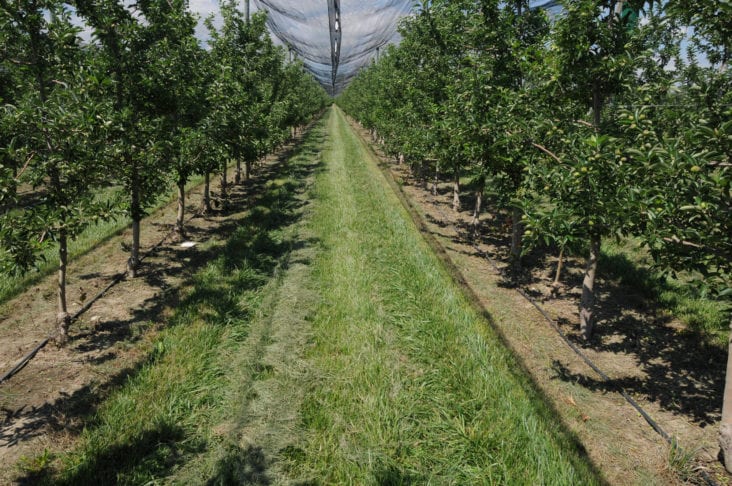 The Challenge of Growing Pears for the Fresh Market

“In 2000, I started work on pears,” said Robinson, an applied fruit crop physiologist at Cornell University. “Pear production was declining in New York state, but in the last few years, there has been a groundswell of interest, especially from the West Coast, to do something big for the pear industry. We’re trying to put together an international project called ‘Pear Revival’ to do research on pear varieties, training systems, rootstock and marketing to see if we can resurrect the pear industry.”

Robinson says that current pear production is defined by traditional approaches. “All of our pear orchards are planted between 100 to 200 trees to the acre; 12-by-20-foot or 10-by-18-foot [spacing],” he said. “Most trees are 25 years or older; there are very few young pear orchards.” Robinson noted that many pear trees in California are even older than those in the East, with 25-foot-tall trees that require tall ladders and platforms for picking.

Growers in northern regions worry that quince rootstock traditionally used for pears isn’t hardy enough for the one winter in 20 when temperatures drop to minus 30 degrees Fahrenheit. “Quince rootstock will be damaged at that temperature. They can handle down to about minus 20. Because of that, no one in North America will plant pears on quince, whereas everyone in Europe plants pears on quince, even in Poland where it’s really cold,” Robinson explained.

During visits to Europe, Robinson noted that trees are spaced 12 feet apart. “They’re simple trunks with little tiny spurs, all covered with hail nets.” He added that there is vigorous root growth.

Research on pear growing in the U.S. has been stagnant, but Robinson believes that some of the trials held in New York will help boost interest in pears.

Slow production and low mature yield are concerns for growers. “We might get 500 to 600 bushels per acre, but we never get 1,000,” he said. “However, new data suggests that high yields – more than 1,000 bushels per acre – are possible with pears.”

There’s been a declining fresh market for pears because fewer people are eating them. And Robinson said, “For [those of] us in New York, there’s an unstable processing market.” Previously, most New York-grown pears were sent to Canada for processing, but the plant is now closed. “We have hundreds of acres of processing [pears] and no home for them.”

Pear growers also have to deal with fire blight and pear psylla.

Robinson believes the solution to low early yield and low maturity yield is high-density plantings. “The same principle we use for apples, if applied to pears, can give us high early yields and high mature yields,” he said. “Also, better rootstocks. [The rootstocks] we’re using aren’t that great. There are some tremendously viable quince rootstocks out there, such as Sydo, but there’s still a question as to whether that rootstock will withstand cold winters. But any rootstock that would improve capacity and reduce tree size would be beneficial.”

“We’re using semidwarfing rootstock, and trees can get away from you pretty quickly, but the fact that they stay smaller when they’re planted close together is helpful. Trees on quince rootstock are always smaller, which is one of the reasons Europeans like it,” explained Robinson. “Bosc are more vigorous and more difficult to control in small spaces.”

With apples, Robinson expects 20 apples the second year, but he couldn’t even get a single flower on pear trees the second year. “The third year, with Bosc, I got nothing. That has to be fixed,” he said.

“Bartlett had some yield in the second year, and much more in the fourth year. Bartlett is a very productive variety, so if they’re planted close together and do some limb bending, they produce well. Bosc [are] more difficult, with no production in year three, but that figure jumped to 1,000 bushels per acre in the fourth year and to 1,600 in year six.”

Despite vast improvements in pear rootstock and production methods, pear psylla still remains a problem. Robinson noted that current pear research is aimed at developing a psylla-resistant pear, but the process will be lengthy.

After five years of study, Robinson concluded that tree density had a mild dwarfing influence on tree size. Trees in systems with the highest density reached 60 percent of the size of the lower-density system after five years. Tree density had a strong positive influence on yield. The super spindle trees were five times more productive than the traditional central leader system, which was the least productive. Increased tree density also resulted in smaller fruit. Long-term manageability with super spindle is questionable without root pruning or growth inhibitors.

The author is a frequent contributor and freelance writer who farms and raises Great Pyrenees in south-central Pennsylvania. Comment or question? Visit www.farmingforumsite.com and join in the discussions.