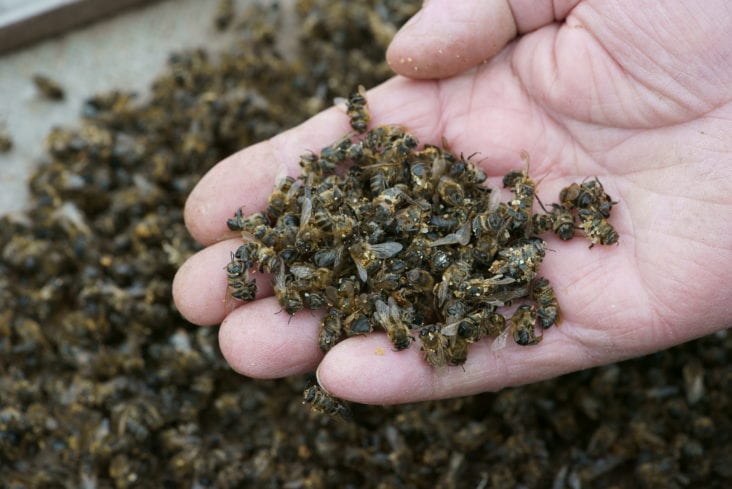 “Neonics are our friends.” Those were the words last fall of the man who built the largest commercial pollination business in the Northwest. He was the keynote speaker at the Pacific Northwest Vegetable Growers Association annual convention in Kennewick, Washington. – Dying Bees

In making this statement Eric Olson, immediate past owner (now retired) of Olson’s Honey of Yakima, Washington, an 18,000-hive pollination firm statement, publicly called out the world’s scientific community on its assertion that neonicotinoids constitute a threat to a stable world bee population.

He disagrees with claims made by researchers he says led to banning them in Maryland, Germany, France and Italy. Citing a study done by Washington State University and published last August, he supports its finding that hazardous exposures of neonics “are not likely to occur in a real-life setting.

Most bee entomologists would agree with at least some of what Olson contends. For example, they would agree neonics are not responsible for large-scale, acute bee kills; they would also agree research has failed to replicate the results of laboratory research in field studies.

“We know there are lots of laboratory and small-cage studies that show neonics kill bees,” said Dennis vanEngelsdorp, a University of Maryland entomology assistant professor. “Where it becomes difficult is when you ask, “Are these lab studies translatable into the real world?”

vanEngelsdorp also agreed no one has demonstrated large-scale, colony-level losses, due to the proper use of neonics. “There are cases of high mortality when the product was applied improperly,” he said.

Olson said he agrees with vanEngelsdorp’s view, citing a 2013 neonic kill of bumblebees near a Target store located outside Wilsonville, Oregon. More than 25,000 bees — most of them bumblebees — died because a property management firm sprayed Safari (dinotefuran) on European linden trees during bloom.

Worse, the bee kill occurred on the first day of the 2013 National Pollinators Week.

Neonics can kill small colonies, said vanEngelsdorp. These incidents may be harder to detect because small colonies can lose a major portion of their populations without affecting colony-level performance.

To date, no one has shown low exposure levels can kill colonies outright. However, researchers are currently investigating what happens over time to bees exposed to less-than-lethal neonic doses.

When pressed, vanEngelsdorp thinks neonics are overused. “I mean, why can’t you buy corn seed that isn’t treated?”

Having said all that, researchers do not find many neonics in bee pollen. “We survey a lot and less than three percent have traceable levels,” he said. “So it is hard for me to imagine they are a major reason for losses in the U.S.”

Summer bee population losses are epic. They have outpaced winter losses because the bulk of the threats to honey bees’ survival are summer-borne.

“The leading cause of mortality is parasites,” said Dennis vanEngelsdorp, a University of Maryland entomology assistant professor. “There’s also a lack of forage, a lot of land that used to have meadows (for habitat) is now used for row crops and there are pesticides that beekeepers and farmers are applying that the bees bring back to their colonies.”

There is broad evidence of other culprits responsible for declines in global bee populations: climate change, poor management practices and either lack of or a low diversity in floral resources. “All are important as far as influencing pollinator health; all are associated with some kind of decline related to pollinator health,” said Scott McArt, a Cornell University research scientist.

What entomologists don’t know is the relative importance of each factor. “In terms of an actual meta-analysis, we just don’t have enough data yet to quantify which one of those factors is most important,” McArt says. 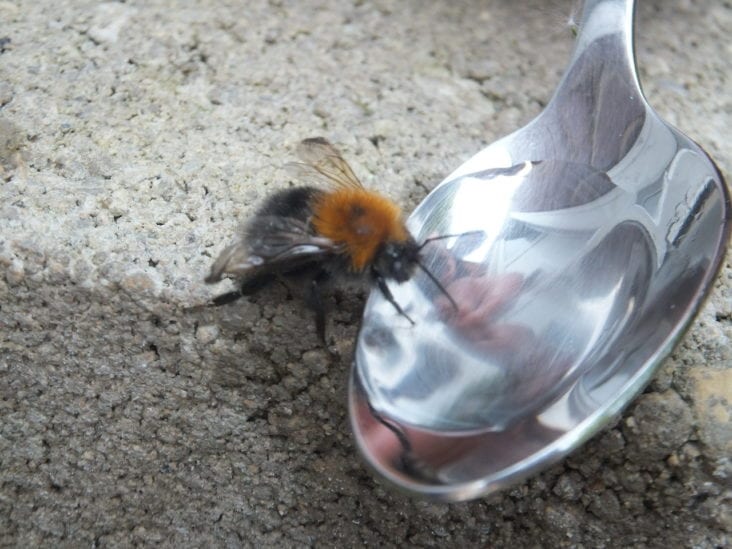 vanEngelsdorp is using human epidemiology tools to control disease. “We use surveys to monitor bee health on many fronts,” he said. “We’re monitoring how strong the colony is, mite and parasite levels, virus levels, pesticide levels and management practices.”

From that information, he attempts to determine risk factors, practices and conditions that will cause problems or reduce them.

McArt’s lab uses a similar approach. For example, they recently discovered one of the major vectors of bee disease is flowers. “Of all the flowers we’ve tested over the last year and a half, 20 percent of them had detections of bee pathogens on them,” he said.

They are also running an apple pollination study aimed at determining pesticide risks to bees. The researchers place 120 colonies in 30 New York orchards whose spray programs varied not spraying pesticides at all during bloom to conventional spray operations.

They used hazard quotients, a calculation based on pesticide residues and product toxicity, to determine risk. “What we’re finding is that the vast majority, up to 70 percent of the risk from pesticides, is not coming from sprays applied during the apple bloom period,” he said. “There was fairly high risk to the bees in some orchards, but it was not necessarily coming from sprays applied during bloom.”

One of the alternative risk possibilities McArt suggested is pesticides applied earlier than the bloom period that persisted through it. Penn State Entomology Professor Chris Mullin said that pesticide persistence, especially when multiple chemical residues are involved, creates additive effects that can be quite lethal to bees.

Mullin’s lab tests a lot of colonies for pesticide residues. He said it’s very rare to find only one active ingredient in a single colony. “We’ve seen hive samples having up to 38 different active ingredients in them,” he said.

Presence of so many active ingredients in one place creates additive effects that can do all sorts of things to bees. “When you look at one of those ingredients, it’s not enough to kill a bee. But what happens when you add all of them together?”

Sometimes, additive effects combine to kill bees. Other times they simply persist in bees’ systems harming them in ways that don’t kill them outright. These “sublethal effects” have become a very active area of research, McArt said.

“Sublethal exposure to insecticides and some fungicides cause increased susceptibility to pathogens,” he said. “Parts per billion levels of insecticides are also affecting bees’ abilities to learn or memorize some of the cues important to their interaction with floral resources and flight can be impacted as well as behaviors within a colony.”

Entomologists agree higher annual losses are resulting from old diseases becoming more virulent. “The mites that carry the diseases are selecting viruses that are much more severe,” said vanEngelsdorp.

Unfortunately, there are no registered tools to combat newer threats. In the absence of registered, direct controls, beekeepers must employ indirect measures.

The carrier mites are old enemies: varroa mites. Unfortunately, the few products that do work against them are not as effective as they once were. “With coumaphos-based products, like Check Mite, and fluvalinate-based products, like Apistan, we know there are mite populations that are resistant to them,” he said.

Amitraz is one of the more effective mite control products available and yet there are reports it doesn’t always deliver sufficient knockdown. Formic acid’s effectiveness is far greater at higher temperatures, limiting its most effective use to warmer seasons and regions of the country. There have been reports that some batches of formic acid have not performed as well as others.

vanEngelsdorp has run an annual national management survey since the 2010-11 season. This year’s survey featured responses from over 5,900 producers managing more than 136,000 hives.

Top mite control performers, according to survey respondents, were Amitraz (48.6 percent fewer losses than those who did not treat), oxalic acid (37.3 percent) and ApiLife Var (31.9 percent).

vanEngelsdorp believes backyard beekeepers — hobbyists and part-timers — are the major players in annual bee population loss because a large majority of them don’t treat for mites. “Sixty percent of backyard beekeepers are not treating for mites because they think, ‘If I don’t treat for mites, I’ll have surviving stock and I can use that as breeding stock and save the world, because I’ve developed resistant bees.’”

Instead, they create what vanEngelsdorp called “mite bombs.” When beekeepers don’t monitor mite levels, and their colonies die, mite populations explode and spread through the area, invading neighboring populations.

“We keep finding people who have been treating mites really assertively and having really low levels suddenly having some huge spikes of mites because [the mites] are getting transmitted from the neighbors,” he said.

Commercial beekeepers, especially pollinators, tend to be more attentive managers and use aggressive management plans to combat pathogens and the parasites that carry them. “People who move bees consistently lose less than people who don’t,” he said.